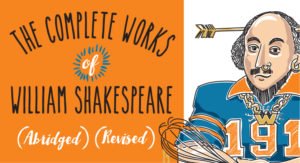 Third Avenue Playhouse (TAP) has announced the dates of auditions for the upcoming StageKids production of THE COMPLETE WORKS OF WILLIAM SHAKESPEARE (ABRIDGED) by Adam Long, Daniel Singer and Jess Winfield. The auditions will be held by director Alex Genty-Waksberg on December 9th at 11 am and December 11th at 5 pm at Third Avenue Playhouse in Sturgeon Bay.

TAP invites middle and high school students from throughout the county to audition. Auditions will consist of staged readings from the play. THE COMPLETE WORKS OF WILLIAM SHAKESPEARE (ABRIDGED) will be performed March 9th, 10th and 11th at Third Avenue Playhouse.

THE COMPLETE WORKS OF WILLIAM SHAKESPEARE (ABRIDGED) by Adam Long, Daniel Singer and Jess WInfield is a fast-paced, irreverent comedy about a group of performers condensing Shakespeare’s plays into as short a time as possible. Highlights include Titus Andronicus performed as a cooking show, and Othello performed as a rap song. First performed by the Reduced Shakespeare Company in 1987, the play has become one of the most popular comedies done for the stage. A perfect mix of high art and low, it is a one of the most fun shows you’ll have a chance to perform in.

The Third Avenue Playhouse is pleased to welcome Alex Genty-Waksberg to its staff of professional performing artists. Alex is a writer / director from White Plains, NY and graduated from Pomona College with a Bachelor’s Degree in English with a Creative Writing focus. Alex has recently worked as a drama specialist and teacher with the after school programs in the Lenox Hill and White Plains, NY school systems, teaching improvisation, drama, and playwriting. He is currently completing work on a film and a podcast series. He moved to Door County in September and is excited to be working with Third Avenue Playhouse.