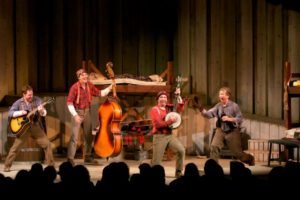 Northern Sky Theater announces ticket sales and casting for the 2018 Summer Season in Door County, Wisconsin. Northern Sky’s Summer Season includes three musical comedies playing in rotating repertory from June 13th – August 25th at the outdoor amphitheater in Peninsula State Park. Tickets for the summer are on sale April 2nd online at www.NorthernSkyTheater.com and at the Northern Sky box office at the Green Gables shops in north Ephraim or via phone at (920) 854-6117.  April office hours are 10am to 4pm Monday through Friday. General admission tickets are $22 for adults, $11 for students, and $6 for children 12 and under. Reserved seats are $7 more per ticket. There is no park sticker required to attend performances in the State Park.

Northern Sky will be premiering two new musicals this summer and offering a new twist on one of its all-time favorite shows. The world premiere, Boxcar, by Laurie Flanigan Hegge and James Valcq, features veteran company members Jeff Herbst, Doug Mancheski, Molly Rhode, and Alex Campea, and introduces performers Doug Clemons, Nadja Simmonds and local 9-year-old Ben Martin. Audiences may recognize Ben from Sevastopol High School’s 2016 performance of Big Fish where he played Will Bloom’s son in the final scene. Artistic Director, Jeff Herbst, notes “We are looking forward to having a young person back on our stage. Boxcar offers us that unique opportunity and Ben Martin is a great fit.” Boxcar plays Mondays at 8:30PM, Wednesdays at 8PM, and Fridays at 8PM.*

Lumberjacks in Love, by Fred Alley and James Kaplan, returns to the woods once a week with a new twist. This fan favorite will be presented for the first time as a sing-along. Patrons are invited to dress up as inspired by the show to be featured in a pre-show costume contest. Northern Sky volunteers will hand out lyrics so audience members new and old can sing along or just take in the fun. Lumberjacks in Love plays one night only on Thursdays at 6PM.*

“We are proud to have last years’ Lumberjacks cast all returning for this fun twist on the show and we are thrilled to be bringing new faces to our stage for the two premieres,” added Herbst. “Doug Clemons and Lachrisa Grandberry have been taking Milwaukee and Madison stages by storm. Nadja Simmonds will be a new graduate from Marquette University and is poised for a marvelous career. We’re very excited to introduce our audience to these new talents.”

The company’s fall performance schedule and casting for Muskie Love will be announced in April and fall tickets go on sale May 1st.

*Some exceptions to the schedule do exist.  Please see the Northern Sky website for performance dates and times.