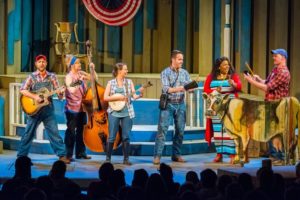 Tickets are on sale March 1st online at www.NorthernSkyTheater.com and at the Northern Sky box office at the Green Gables shops in north Ephraim or via phone at (920) 854-6117. Office hours are 10am to 4pm Monday through Friday.

Northern Sky will premiere a new musical this summer and offer a 2018 summer hit along with a classic from 2013.

Audiences may recognize Isaiah Spetz from the 2017 performance of Victory Farm where he played the German POW, Karl. Lachrisa Grandberry made her Northern Sky debut in last year’s hit, Dairy Heirs. Corrie Beula Kovacs was last seen on the Northern Sky 2014 fall stage as the female lead in The Bachelors.

We Like It Where? plays Mondays at 8:30PM, Wednesdays at 8PM, Thursdays at 6PM and Saturdays at 8PM.

Windjammers plays Tuesdays at 8PM and Thursdays at 8:30PM.*

Dairy Heirs plays Mondays at 6PM and Fridays at 8PM.

Summer general admission tickets are $22 for adults, $11 for students, and $7 for children 12 and under. Reserved seats are $8 more per ticket. There is no park sticker required to attend performances in the State Park.

“Ray Jivoff, who will be ending his tenure as artistic director of Skylight Musical Theatre in Milwaukee, will be making his debut this fall in Dad’s Season Tickets on our new indoor stage,” states Artistic Director Jeff Herbst. “We will have an exciting and challenging summer ahead of us with the opening of our Creative Center at the corner of county highways A and F. Planning a world premiere of a show that’s never been done before in a space that’s never been performed in before is a leap of faith, to be sure. It should make for good theater on and off stage.”

*Some exceptions to the schedule do exist.  Please see the Northern Sky website for performance dates and times.