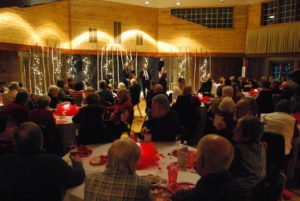 Birch Creek celebrates the Valentine’s weekend with an evening concert of Broadway Love Songs. This popular and decidedly romantic music will be performed by pianist Jodie DeSalvo (Symphony Piano Faculty) and tenor Jonathan Zeng. As the evening begins, concert guests will enjoy a selection of heavy hors d’oeuvres and light desserts while comfortably seated at their cabaret table in the intimate glow of Juniper Hall. Music fills the room with Jodie’s exceptional piano playing and Jonathan’s impeccable voice as the audience is treated to Broadway’s favorite tender ballads, heart-breaking tunes and inspiring love songs. There will be floor space to dance if any, or all, of the attendees are moved by the music.

This concert is on Saturday, February 10 beginning at 7:30 pm. Tickets are $60 and can be purchased online at birchcreek.org/tickets or by phone at 920-868-3763. Cash bar will be available throughout the evening. This event is generously sponsored by Door County Medical Center, Michael and Connie Glowacki and Roger and Lynn Van Vreede. Because of their generous sponsorship, all proceeds from this event will go to support for Birch Creek students. Seating is limited and we expect this concert to sell out so please register early.

Jodie DeSalvo has captured national and international attention with her classical and jazz interpretations of the masters of keyboard literature. Upon winning the Artist International Competition in 1988, Ms. DeSalvo made her Carnegie Hall debut to critical acclaim with an encore performance two years later at Lincoln Center. She has been a top prize winner in the Young Keyboard Artists Competition, the American Music Scholarship Competition and the National Federation of Music Clubs Competition. A graduate of the Hartt and Manhattan Schools of Music, and a former student of John Browning and Gary Graffman, she is also a past recipient of the Artist Fellowship Grant from the National Endowment for the Arts.

While Jodie is a serious classical pianist, she is ultimately an entertainer who loves to engage her audiences and have fun with them. Over the last two years she has added to her repertoire the comedy of Victor Borge. She has found great joy in interpreting some of his best loved skits, including Phonetic Punctuation and Inflationary Language, as well as writing some of her own original material. These concert performances are enjoyed by audiences of all ages!

Lauded for his versatility as a performer and accomplished in Musical Theater, Opera, Oratorio and Concert repertoire, “excellent tenor” Jonathan Zeng has performed throughout the United States with companies such as Cincinnati Opera, Central City Opera, Tulsa Opera, Opera Memphis, Utah Festival Opera and the Princeton Festival. With a voice described as “impeccable,” Jonathan is based in Chicago and has appeared as soloist with The William Ferris Chorale in the American premier of John Joubert’s Five Songs of Incarnation and Bonaventura Somma’s Missa Pro Defunctis. You may also see him singing with the Grant Park Symphony Chorus or performing in Chicago Fringe Opera productions.

Jonathan is an avid proponent for arts education and vocal instruction and has served as an adjunct faculty member in the Preparatory Department at the Cincinnati College Conservatory of Music. He has maintained a private voice studio for more than a decade. Jonathan received a BA in Music Education from Western Illinois University and an MM in vocal performance from the Cincinnati College Conservatory of Music. Jonathan is a Birch Creek alumni who played trombone before discovering his talent and love for vocal performance. He also writes and records his own music.

Birch Creek Music Performance Center in Egg Harbor, WI, is a residential summer music academy for advanced young musicians. With a performance emphasis, students are taught by nationally known performers and educators during the day, and perform alongside them in concerts at night. Four sessions focus on Percussion & Steel Band, Symphony, and Big Band Jazz. 2018 concert and session dates are posted at www.birchcreek.org.