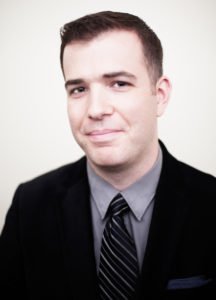 Chris Wild has been named to serve as the 2018 Karen Smuda Emerging Conductor. The Karen Smuda Emerging Conductor Program provides training and exposure for aspiring conductors with a professional orchestra. The program’s intention is to provide broad experiences with all aspects of orchestra conducting and management to enhance their career goals. Applicants must be enrolled in or recently completed a doctoral program in conducting.

Conductor & cellist Chris Wild’s performances have been lauded as “insatiable” (The New York Times), resulting from his enthusiastic pursuit of musical connections. He has performed in concert halls throughout the Americas and Europe and for various broadcasts & recordings. Chris has recently led concerts, readings, and education concerts with the Rochester Philharmonic Orchestra (New York), Windsor Symphony Orchestra (Canada), Oregon Bach Festival Orchestra & Chorus, and Camerata Antonio Soler (Spain), as well as performances with Northwestern University’s Symphony Orchestra, Chamber Orchestra, Bienen Strings, and Opera. He is conductor for the Chicago-based project Après L’Histoire, which recently performed Igor Stravinsky’s L’Histoire du soldat at the Chicago Arts Club and Poetry Foundation, and is commissioning new works for the piece’s centennial year.

This also marks the final year of Chris’ studies towards a DMA in Orchestral Conducting at Northwestern University, where he studies with Victor Yampolsky and is completing a final project centering on Charles Ives’ Three Places in New England.

Chris’ debut cello album, Abhanden, is described by New Music Box as “a virtuosic tour-de-force for solo cello and Wild’s approach to the material is soaring, lyrical, and bold.” He performs regularly as a member of Ensemble Dal Niente, a Chicago-based contemporary music collective noted for its “bracing sonic adventures” (Chicago Tribune).

Chris began his cello studies at the age of five in British Columbia, Canada, where he would later win first place in the strings category of the Canadian Music Competition. He moved stateside to attend the University of Michigan, where he studied cello with Erling Blöndal Bengtsson and Richard Aaron and won first place in the school’s Concerto Competition. His solo performances have included classical and contemporary repertoire with the Vancouver Symphony Orchestra (Canada), Third Coast Percussion (Chicago), Experimental Sound Studio SWR (Germany), and University of Michigan Philharmonia Orchestra. He can be heard on the New Amsterdam, New Focus, New World, Navona, Naxos, and Carrier record labels.

Mr. Wild will take the podium on three separate occasions during the 2018 Peninsula Music Festival. On Thursday, August 9 he will conduct Lohengrin, Act I Prelude by Richard Wagner. Wild’s second appearance on the podium will be Thursday, August 16 for a performance of Alexander Borodin’s In the Steppes of Central Asia. August 23 will be the final time that Mr. Wild will be on the podium for Glazunov’s Concert Waltz No. 1.

The enthusiasm and encouragement of former board member Karen Smuda led to the Executive Committee of the Peninsula Music Festival naming the program in her memory. The committee felt is only fitting to recognize Karen’s passion for this program. Though her death was untimely, Karen’s love of the Festival and her support of its education programs will live on in this program. This is the sixth year of the program.

The Peninsula Music Festival is a professional symphony orchestra presenting nine different symphonic concerts in three weeks at the Door Community Auditorium in Fish Creek. The 66thSeason runs August 7 – 25 with concerts every Tuesday, Thursday and Saturday at 7:30 pm. Tickets start at $35 and are reserved. Student/Chidren are just $10. Tickets can be purchased at the Festival’s administrative/box office, 10347 N. Water St. (Hwy 42) North Ephraim, on line at www.musicfestical.comor by calling 920-854-4060.