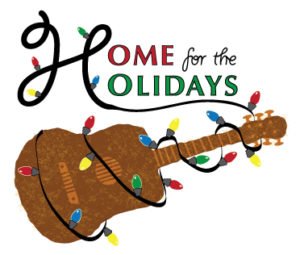 Door County’s award-winning Northern Sky Theater has announced the line-up for its annual holiday concert at the Old Gibraltar Town Hall. Now in its 11th year, “Home for the Holidays” will feature three talented performers  Eric Lewis, Katie Dahl, and Rich Higdon. The all-new concert for 2017 will play for six performances from December 27th through December 31st.

Reunite with Northern Sky favorites Eric Lewis, Katie Dahl, and Rich Higdon for an uplifting evening of intimate seasonal songs, dazzling instrumental fireworks, and delightful holiday humor. These three musicians, each well known in Door County in their own right, also appear frequently together as a trio, most recently releasing “Solid Ground,” an album of songs written by Northern Sky co-founder Fred Alley. Eric, Katie, and Rich’s musical prowess, ease with one another, and love of holiday music will all be on full display at this year’s “Home for the Holidays.”

One of Door County’s favorite musicians, Eric Lewis, is thrilled to be back on the stage with his Northern Sky family for the holiday season. He has been named “Best Male Musician” by Door County Magazine and received the Premier Player Award from the National Academy of Recording Arts and Sciences (Memphis chapter). Eric has opened for Travis Tritt and Chuck Berry, and performed coast to coast with Jason Petty, Robin and Linda Williams (of Prairie Home Companion) and many others. Last fall he released his newest CD, Before the Last Time.

Singer-songwriter Katie Dahl has performed her original songs everywhere from the dusty cliffs of Mali, to the winding canals of southern France, to the cedar forests of Door County. Since first appearing on Northern Sky’s stage wearing a spider hat in “Sunsets and S’mores,” Katie has earned accolades nationwide for the depth and power of her alto voice, the literate candor of her songs, and the easy humor of her live performances. Katie is also a playwright who co-wrote the beloved Northern Sky show Victory Farm. She is currently working on another show. Karen Impola of Iowa Public Radio says, “Katie Dahl’s music combines a love for her rural midwestern roots, a droll wit, and a clear-eyed appraisal of modern life, all served up in a voice as rich as cream.” 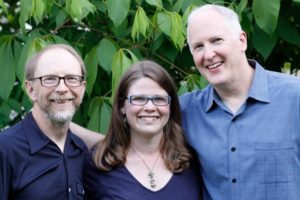 Rich Higdon is a multi-instrumentalist who has shared the stage with his wife, Katie Dahl, all across the country, playing string bass, washboard, spoons, jug, and ukulele. As an actor, Rich worked extensively with Paul Sills, pioneer of story theatre. Rich is also a founding member of The Water Street Hot Shots, who were finalists in the 2010 International Blues Challenge in Memphis. The Old-Time Herald writes that “The Hot Shots are a talented bunch of fellows who bring a depth of musicality to the proceedings.”

Tickets can be purchased online at www.NorthernSkyTheater.com, at the Northern Sky box office at the Green Gables shops in north Ephraim or via phone at (920) 854-6117. Office hours are 10am to 4pm Monday through Friday.

Performances of “Home for the Holidays” are scheduled for 4pm on December 27th, 28th, 29th, 30th and 31st plus one 7pm show on Saturday, Dec. 30th. Tickets are $24 for adults and $14 for students age 17 and under. All seats are General Admission. Any remaining tickets will be sold at Gibraltar Town Hall beginning 45 minutes before each performance. As a special holiday treat, each show will also feature a drawing for gift certificates from local businesses.