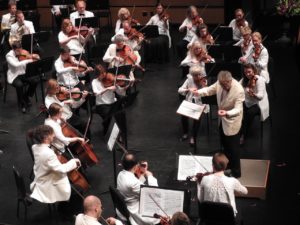 The Peninsula Music Festival (PMF) will travel to the great musical cities of the world when it presents the 66th Season, August 7 – 25. Concerts are every Tuesday, Thursday and Saturday, 7:30 pm at the Door Community Auditorium in Fish Creek. Tickets range from $65 to $35 with students and children just $10. The Peninsula Music Festival is a fully professional symphony orchestra with musicians coming from all over the world to spend three weeks in Door County each August. Victor Yampolsky is celebrating his 33rd season as the music director and conductor.

Week one of the PMF continues with a trip from Paris to Munich on August 9. The concert is entitled Thorns of Love and featured soloist is cellist Anna Burden, a member of the PMF Orchestra. Ms. Burden will perform the Schumann Cello Concerto. The concert also includes the Love Scene and Scherzo from Romeo and Juliet by Berlioz, Wagner’s Prelude to Act One of Lohengrin and Death and Transfiguration by Richard Strauss.

The Berlioz, Wagner, and Strauss pieces are receiving their first PMF performances. The Schumann Cello Concerto was first performed at the PMF in 1989 by Wendy Warner and Victor Yampolsky conducting and most recently in 2010 with Robert DeMaine and Victor Yampolsky. Anna Burden has previously performed as soloist at the PMF in the Elgar Cello Concerto in 2015 and the Prokofiev Sinfonia Concertante in 2012.

This concert is sponsored by Friends of PMF 3.0.

The first week closes on August 11 with a program devoted to Leonard Bernstein’s centennial and the city of New York. Vocalists Kathy Pyeatt and Keven Keys will join the orchestra for a concert that includes Mahler’s Adagietto from Symphony No. 5 (dedicated to the memory of long-time PMF supporters Marge Binder, Bibs McAghon and Sarah Wright), Bernstein’s Symphony No. 1 and Symphonic Dances from West Side Story and Selections from Old American Songs by Copland.

Bernstein’s First Symphony and Copland’s Old American Songs are first PMF performances. The Adagietto from Mahler’s Symphony No. 5 was first performed at the PMF in 1983 with William McGlaughlin conducting and most recently in a complete performance of the symphony in 2013 with Victor Yampolsky conducting. The Symphonic Dances from West Side Story were first performed by the PMF in 2000 with Stephen Alltop conducting and most recently in 2009 with Victor Yampolsky conducting. Kathy Pyeatt previously performed here in 2015 in Act II of Don Giovanni with Keven Keys. This concert is sponsored by Robert & Joan Schaupp.

Two thirds of the way through the season on August 18, we will return to the music of Vienna with Mozart and Haydn. Pianist Andrew Armstrong will return to the PMF stage with Mozart’s Piano Concerto No. 12. Haydn’s 39thsymphony will open the concert. The second half of the concert will include Haydn’s Nocturno No. 1 and Symphony No. 25 by Mozart. These are the first PMF performances of Mozart’s Piano Concerto No. 12 and Haydn’s Nocturno No. 1. Haydn’s Symphony No. 39 was performed previously in 1992 conducted by Victor Yampolsky. Mozart’s Symphony No. 25 was first performed at the PMF in 1982 with Michael Charry conducting and most recently in 1993 with Victor Yampolsky conducting. Andrew Armstrong has performed previously at the PMF in 2006 in the Chopin Piano Concerto No. 2 and Prokofiev’s Piano Concerto No. 3. The Ralph and Genevieve B. Horween Foundation is the sponsor of this concert.

The final week opens on Tuesday, August 21 with a trip from Los Angeles to New York and guest conductor Alastair Willis making his debut with the Festival along with violinist Maya Anjali Buchanan. Ms. Buchanan will perform the Korngold Violin Concerto,  previously performed in 1994 with Chantal Juillet and Victor Yampolsky conducting. Korngold wrote the score for sixteen Hollywood films so he is in good company with the music of Williams, Rodgers, Gershwin and Hermann. The full program of Hollywood music is available on the Festival’s website: www.musicfestival.com. Once you see the program you might want to bring your light saber to defend against the dark side. Gail Fischer is the sponsor.

The Festival returns to St. Petersburg and Moscow on August 23 when cellist Riana Anthony performs the Kabalevsky Cello Concerto No. 2. The concert includes Concert Waltz No. 1 by Glazunov and Scheherazade by Rimsky-Korsakov. This program marks the first PMF performances of the Glazunov and Kabalevsky and the first appearance at the PMF of Riana Anthony. Scheherazade was first performed at the PMF in 1998 and most recently in 2010, both conducted by Victor Yampolsky. This concert is sponsored by Friends of PMF 2.0.

The 66th season of the Peninsula Music Festival concludes on August 25 with a trip from Prague to Budapest. Pianist Spencer Myer will celebrate his birthday with a performance of the Liszt Piano Concerto No. 2. The concert opens with Czech Suite by Dvorak and closes with the Bartok Concerto for Orchestra. Dvorak’s Czech Suite was first performed at the PMF in 1955 with Thor Johnson conducting and most recently in 1978 with Michael Charry conducting. Liszt’s Second Piano Concerto was first performed at the PMF in 1982 with Gary Steigerwalt and Michael Charry conducting and most recently in 2008 with Pavel Gintov and Victor Yampolsky. Bartok’s Concerto for Orchestra has been performed previously in 2000 with Victor Yampolsky conducting. Spencer Meyer’s previous PMF performance was in 2016 in Bernstein’s Symphony No. 2, Age of Anxiety, with Alain Trudel conducting. The Egan Family and the Little Rapids Corporation – Egan Family Foundation, sponsor this concert.

The Peninsula Music Festival is a professional symphony orchestra presenting nine symphonic concerts in three weeks each August. Concerts are held in the Door Community Auditorium, Fish Creek. The administrative/box office is located in the Green Gables Shops in Ephraim. Tickets are available for all concerts. Purchase by calling 920-854-4060 or on line: www.musicfestival.com.