FISH CREEK, WI — There are few places quite like Peninsula Players Theatre. Located on picturesque Green Bay, the historic residential summer theater is both a host to professional talent and a haven for young theater artists on the precipice of their careers. For the interns, this theater’s program is a chance to work alongside theater professionals in a living and learning environment. The interns have the opportunity to work alongside members of Actors’ Equity Association, the union of professional actors and stage managers; members of United Scenic Artists, the union of scenic, lighting, sound and costume design; and members of the Stage Director and Choreographers Society.

The theater’s founders, Caroline and Richard Fisher, began the theater in 1935 with the intention of providing Door County with high quality performing arts and educating young theater professionals. For 83 years, this tradition has carried on and within this season, the theater has welcomed 10 new interns from all over the country to develop their craft.

The theater has attracted applicants from across the United States. The selected interns have traveled from Colorado, Kentucky, Illinois, Minnesota, Mississippi, New Jersey, Pennsylvania, Tennessee and Wisconsin to hone their theater crafts.

Claire Schmidt, an administrative intern from Kaukauna, Wisconsin, was led to this internship by friends who have either previously worked at Peninsula Players or have participated in the internship program from her alma mater, Millikin University.

Schmidt was selected as one of three interns to receive the Kathryn A. Doerr Apprentice Fund as she expands her knowledge of arts management through this internship. Established in 2013 in memory of Katie A. Doerr by her family, this fund provides critical support to the apprentice program. During her lifetime, Doerr was an advocate and supporter of arts educations. Her legacy provides scholarships for apprentices during the Players’ season. This year’s other two recipients include Alexander Carey, a production intern and student at UW- Whitewater pursuing a career in stage management and Sean Pruett-Jones, a production intern and recent graduate of St. Olaf College who is expanding his knowledge of all technical theater.

The Enroth Family Fund of the Greater Milwaukee Foundation is supporting Lexi Facemyre’s internship experience. Lexi is a production intern and a recent graduate of Ball State University who is pursuing a career in stage management.

The internship is unique in that it allows those in the program to not only work alongside professionals, but share meals and living spaces with them as well. Administrative Intern Catherine Healey explained her favorite part of the summer: “getting to work and live among so many talented and interesting people. The constant support I feel from my coworkers and friends and the advice I’ve received on and ‘off’ the clock have provided me with so much insight into how the professional theater world operates and how I may contribute to it.”

Healey recently graduated from Connecticut College where she concentrated in acting. Through this internship she has been able to see the business side of theater by assisting in ticket sales, managing the Canteen, as well as assisting the Managing Director, Business Manager, and the Development and Events Manager.

“If I ever wanted to start my own theater company, I feel like it’s important to know as much as I can about how a theater operates,” states Healey. “Peninsula Players has taught me more about how all of the pieces I learned about in college fit together.”

No intern in the program is limited to one department. The two administrative interns take turns between Box Office duties, house management and managing the theater’s canteen. The eight production interns rotate among departments including scene shop, properties, Box Office, stage management, costume shop and light and sound board operation. Interns, as a result, have to be highly adaptable.

“I learned how to think quickly on my feet and to anticipate what people’s needs were so that I could work more efficiently,” said Production Intern Alexander Carey.

Carey is entering his senior year at UW-Whitewater where he is pursuing a degree in stage management. This summer he served as Assistant Stage Manager for the Peninsula Player’s first show of the season, the world premi?re of Sean Grennan’s “Now and Then,” as well as had rotations in the costume shop, scene shop, electrics shop and Box Office. While he’s thrived in each department, his favorite has been his assistant stage manager position.

“It was amazing to work so closely with the actors,” said Carey. “Being able to work alongside a professional Stage Manager has been so helpful. I was really able to see how a professional production runs compared to the collegiate level.”

Production intern Taylor Ballard, a rising Junior at Brigham Young University, summed up perfectly what this program is meant to be for the interns. When asked what she hopes to take from this experience her response was, “the confidence to put myself out there and the knowledge I need to pursue my dreams.”

The Actor’s Equity Association, the union of professional actors and stage managers, accredits the Peninsula Players intern program. Interns may earn points towards membership in the union and/or college credit through their summer stage work at Peninsula Players. For more information about the internship program visit the Players website at www.peninsulaplayers.com for an application.

If you are interested in supporting the Peninsula Players Intern Program, contact Danielle Szmanda at danielle@peninsulaplayers.com or via phone at (920) 868-3287.

Peninsula Players is America’s oldest professional resident summer theater and is unique in the country for its diverse productions, continuing loyalty to a resident company and its beautiful setting of 16 wooded acres along the cedar-lined shores of Green Bay. For 83 years the theater has become a Door County landmark and its cornerstone arts institution, attracting audience members from throughout Wisconsin and across the country. 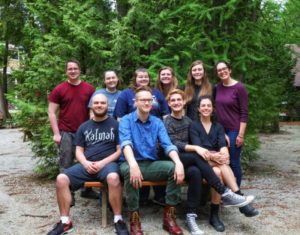 You may have been greeted by one of our hard-working interns in either the parking lot, Box Office, theater or will-call window at the canteen. Not only do each of the interns work these nightly duties but they also help to run the shows in such areas as lighting, properties, sound, costumes, house management, assistant stage management and concessions; during the day they also work in these areas for the next show. Photo by Brian Kelsey.