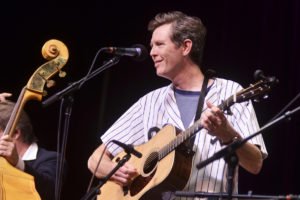 Singer-Songwriter Robbie Fulks will be featured in concert in the second of five concerts scheduled in in the 35th season of winter folk concerts at the White Gull Inn in Fish Creek on Wednesday, December 5. Fulks will be accompanied by Chicago musician Don Stiernberg, a leading exponent of jazz mandolin as well as all styles. Tickets for the 8 PM concert are $23.

The Chicago Tribune calls Robbie Fulks “…a masterly, …multifaceted songwriter…who can belt out hip-shaking, honky tonk, honeydew pop and chilling little ballads…with an unrivaled skill and spirt. So good, he’s scary.”  Fulks is prodigiously talented, with the soul of a country singer and the mind of a vaudevillian. Widely regarded as one of the most gifted songwriters to ever ply the trade, he can sing the kids ditty “Eggs” and Merle Haggard’s “Sing a Sad Song” back to back and mean them both. Lost in the deserved accolades for being a fabulously unique, clever and heartfelt writer is the fact that he’s also one of the best guitarists around, who can whip it out in honky-tonk, country, bluegrass, power pop or whatever strikes his whimsy at the time.

Born in York, Pennsylvania, Robbie grew up in a half-dozen towns in southeast Pennsylvania, the North Carolina Piedmont and the Blue Ridge area of Virginia. He attended Columbia College in New York City before dropping out to focus on the Greenwich Village songwriter scene. In the mid-1980’s Fulks moved to Chicago and joined Greg Cahill’s Special Consensus Bluegrass Band, with whom he made one record in 1989. Since then he has gone on to create a multifarious career in music. He has been a staff instructor in guitar and ensemble at Old Town School of Folk Music, worked on Nashville’s Music Row as a staff songwriter, and has made multiple appearances on WSM’s “Grand Ole Opry”, NPR’s “Fresh Air”, PBS’s” Austin City Limits”, NBC’s “Today”, “Late Night with Conan O’Brien” and “30 Rock.” 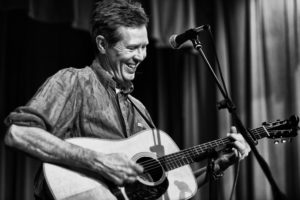 Fulks’ 2017 release album Upland Stories, earned that year’s-best recognition from NPR and Rolling Stone among many others, as well as two Grammy nominations, for folk album and American roots song.  His most recent recording, “Wild! Wild! Wild!” is a collaboration with Linda Gail Lewis, younger sister and frequent performing partner of Jerry Lee Lewis. Critics have described it as “Americana music that is as butt shakin’ as Beale Street, deep-rooted as the Grand Ole Opry, and hip as a trip to the strip.”

Future scheduled concerts in the series are: Johnsmith and Dan Sebranek on January 16; Susan Gibson on March 27; and Mile Twelve on May 1.

Tickets and more information on the concerts and the optional dinners can be obtained by calling the White Gull Inn at (920) 868-3517 or accessing the Inn’s website, www.whitegullinn.com. If still available, concert tickets can be purchased at the door, although many concerts sell out, so advance ticket purchase and reservations for the pre-concert dinners are recommended.