You are here: Home / Archives for Door County Folk Festival 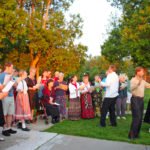 The Door County Folk Festival (DCFF), which since 1978 has touched the lives of thousands of folk dance and music-lovers, has announced its first-ever GoFundMe campaign in order to expand the Festival’s programming and audience development. The DCFF is known throughout the folk dance world as a creatively fun and educational extended weekend of dancing, […]