You are here: Home / Archives for The Special Consensus 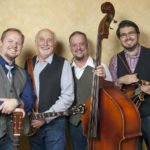 Grammy-nominated bluegrass band The Special Consensus returns to Fish Creek on Weds., December 6 to perform at the White Gull Inn. Because the first night sold out immediately after being announced, a second performance has been added the following night, Thurs., December 7. Tickets for the 8 pm concerts are $23. Formed in the Chicago […]