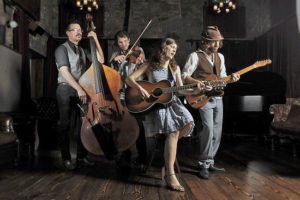 The Ruth Moody Band will be featured on Wednesday, Nov. 8 in the first of six concerts scheduled for the 34th season of winter folk concerts at the White Gull Inn in Fish Creek. Tickets for the 8 pm concert are $20.

Australian-born, two-time Juno Award winning singer-songwriter Ruth Moody is from Winnipeg, Canada. Founding and current member of the internationally renowned, Billboard-charting trio The Wailin’ Jennys, she has performed in sold-out venues around the world, made numerous critically-acclaimed albums, and has appeared more than a dozen times on the radio show A Prairie Home Companion. Although best known for her work with the Wailin’ Jennys, Ruth is an artist of exceptional depth and grace in her own right. Critics have lauded her ethereal vocals, impressive multi-instrumentalism, and insightful songwriting. Written with a maturity and wisdom that belies her age, her songs are timeless, universal and exquisitely crafted, all sung with an intimacy and honesty that is unmistakably hers. In June 2010, Ruth released her first solo album, The Garden. These Wilder Things, the highly anticipated follow-up album, features guest appearances by Mark Knopfler, Jerry Douglas, Aoife O’Donovan, and the Wailin’ Jennys.  Ruth continues to tour worldwide with her all-star band in support of These Wilder Things. The Ruth Moody Band consists of Adrian Dolan on fiddle, mandolin, viola, mandola and vocals; Adam Dobres on guitars, ukulele and vocals; and Sam Howard on upright bass and vocals.

The White Gull Inn’s winter concert series debuted in 1984, with monthly concerts from November through April. According to White Gull Innkeeper Andy Coulson, the early performances were roughly designed after house concerts, which are usually held in the home of someone who provides lodging, dinner and breakfast and takes up a collection at the door for the artist. Although not technically a house, The White Gull had the rooms and the meals, Coulson said. Before long, the series gained popularity and began attracting in artists such as Tom Paxton, Bob Gibson and John McCuen. “It took a while, but the artists who came the first few years liked being here in winter and spread the word,” Coulson said. Nearly 200 musicians have performed at the inn during the 34 seasons. Artists in the series who have either won or been nominated for Grammy Awards include Mollie O’Brien, John McCuen, John McCutcheon, Tom Paxton, the Special Consensus, Robbie Fulks and Claire Lynch. Molly Tuttle, who performed at the inn last January, was named Guitar Player of the year at last month’s International Bluegrass Musician Awards (IBMA).

Tickets and more information on the concerts and the optional dinners can be obtained by calling the White Gull Inn at (920) 868-3517 or accessing the inn’s website, www.whitegullinn.com. If still available, concert tickets can be purchased at the door, although many concerts sell out, so advance ticket purchase and reservations for the pre-concert dinners are recommended.